I’m a trained mechanical engineer practicing as a software engineer and love growing my own food. I’ve been developing my skills in working toward closed loop food production, efficient propagation, soil health and compost at a community garden in Melbourne.

The garden is currently all manual, including the watering roster. This mostly works well, but sometimes people forget. And this is a problem in hot weather, when not watering for a day can wipe out weeks of seedling growth in the greenhouse.

After experiencing this a few times, I became curious to automate the watering in the greenhouse.

Building a watering system that’s reliable was the top priority. And if the system for some reason malfunctions (most systems do at some point), I’d like to be notified as soon as possible.

The constraints I was working with: We don’t have electricity on-site, so the system needs to be self sufficient for its energy needs. We do have a mains water on-site, but the tap is far away from the greenhouse, so not depending on a tap for water is also desirable.

Finally, I’m interested in how simple and affordable these systems can be, as a lot of IoT can seem complex and out of reach cost-wise.

The system I designed and built consists of 3 subsystems. The power system, the watering system and the control system.

A diaphragm pump, pumps water from a reservoir outside the greenhouse through a number of misting nozzles positioned over the seedlings. I decided on a diaphragm pump because it doesn’t break when it runs dry - and because I’m using a reservoir as a water resource, there’s always a chance it runs dry at some point.

Apart from this fully automated mode, the misting system can also be forced on and forced off. Switching between these modes is done through a push button, with LEDs indicating which mode is selected.

The control software switches to time-interval based misting when a sensor output below a certain value is measured. This is to prevent the misting system being permanently switched on if the moisture sensor breaks down or is accidentally removed from the soil. Because I was curious about the overall conditions in the greenhouse, I also added a DHT-22 sensor to the system to measure temperature and humidity.

Finally, there is a buck converter between the pump and the charge controller to reduce the voltage supplied to the pump. This is necessary as running the pump on 12V produces too much water pressure in the misting system, resulting in blown out nozzles.

To make sure I know what’s going on with the greenhouse and the watering system, so I can jump in if something is wrong, the greenhouse regularly uploads its status (soil moisture level, ambient temperature and relative humidity in the greenhouse) to the internet. Because there is no WiFi available, and we only need to upload small amounts of data (a few bytes at a time), I chose to use LoRaWAN for this. LoRaWAN is a low power, wide area networking protocol. In other words, it’s great for transmitting small amounts of data over relatively long distances (the record stands at over 700km, but in built up areas with cheap antennas a few kilometers is more commonplace).

To transmit the data using LoRaWAN I added a Dragino LoRa shield to the Arduino. I was lucky enough that the greenhouse is within range of a LoRa gateway at Melbourne University a few kilometers away that is part of the The Things Network - a global, open source and open LoRaWAN network. The program running on the Arduino encodes the sensor data into a few bytes, and the LoRa shield transmits that payload to the LoRa gateway at Melbourne University. That gateway is connected to The Things Network, making the data available online. I created an account on AllThingsTalk and connected it to my The Things Network account. AllThingsTalk is a service that lets you quickly create dashboards from sensor (or other) data, so you can easily see what’s going on.

The control software can be found on Github 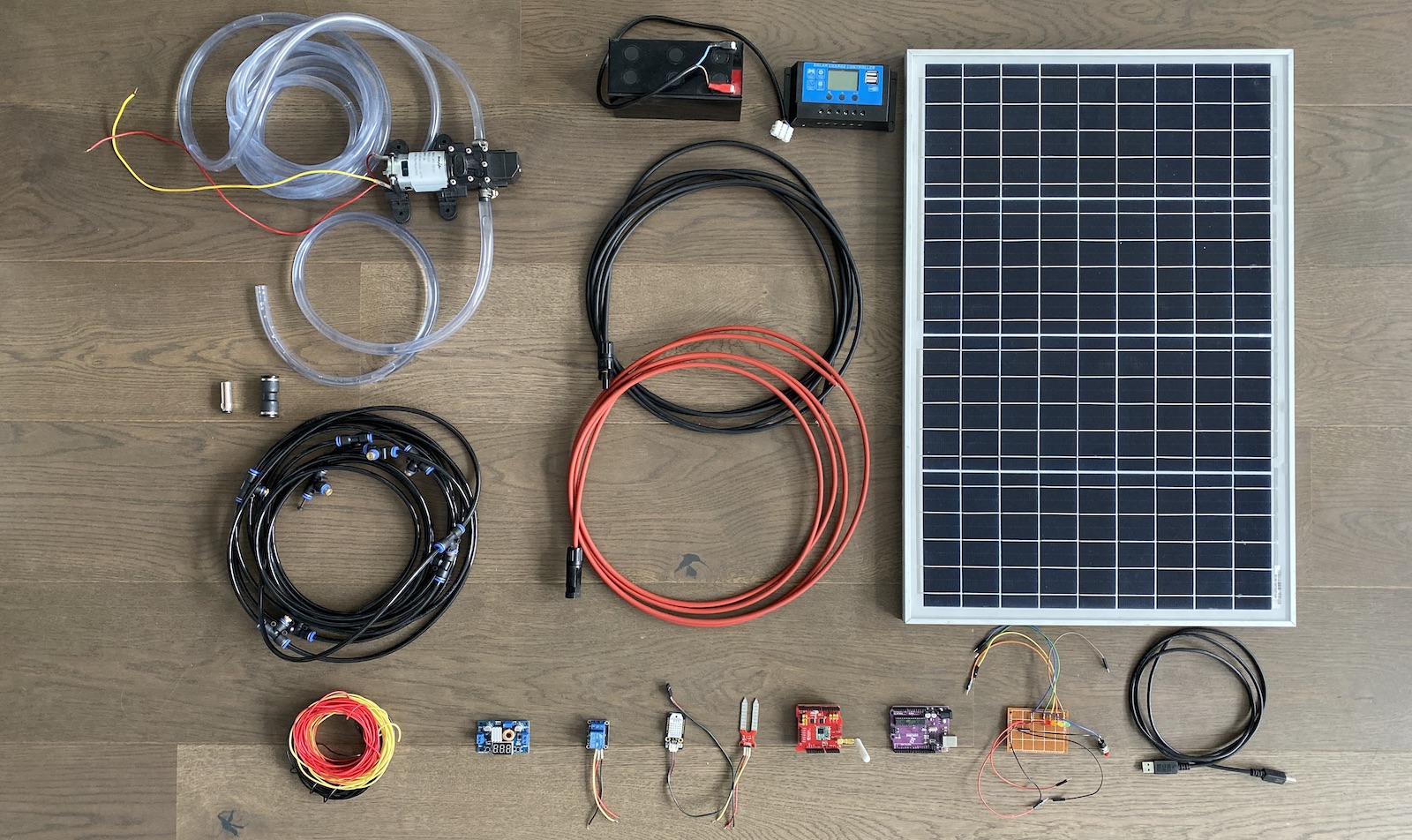 Below is an overview of all components used in the system, as well as what I paid for them.

Prices listed are what I paid. Links are to the supplier I purchased from where possible or the same product from a different supplier if the original supplier is no longer selling the product. Prices shown when following the links may be different than when I purchased. Some of these components (mostly the electronics) could have been sourced cheaper through AliExpress.

First, and most importantly, the system works. Misting automatically turns on based on soil moisture, the button lets you force misting or turn the system off, and with the LoRa setup I can remotely monitor the greenhouse.

There are few teething issues as well. The misting nozzles easily clog leading to water streaming out of the nozzle instead of being dispersed. Cleaning the nozzles with vinegar resolved the issue, but doing that frequently is not desirable.

The low cost moisture sensor only gives a relative reading, so it takes some calibrating to figure out what value of the moisture sensor equates to a desirable level of watering for the seedlings. Having only one moisture sensor for the whole greenhouse (small as it is) is also not ideal as it’s possible for that moisture sensor to not be representative of all seedling pots in the greenhouse. Furthermore this sensor is resistance based and fully exposed to the soil, which will result in corrosion and ultimately failure of the sensor. A capacitive moisture sensor (where the active components aren’t in direct contact with the soil) is a more durable (and somewhat more expensive) option.

It’s also tricky to cover all seedlings with the 10 misting nozzles currently in the system.

Based on my experiences so far I’m looking to make the following adjustments:

The system I built was based on the needs and constraints we had in our garden. If you are thinking of building a similar system your needs and circumstances may be different. Here are a few possible variations on this system:

I was influenced and inspired by these systems other DIY-ers had built before me: